The mods on this page are primarily concerned with the Dunlop Crybaby and Vox V847 wahs, but they can be applied to most wahs which have an inductor. For an in-depth examination of the Vox wah circuit, vist RG Keen's Geofex site and read The Technology of Wah Pedals.

These mods are all fairly cheap to do and they're reversible, so it's not the end of the world if you don't like the results. Refer to the photos below if you're not sure which parts to change.

Replace the 33K resistor in parallel with the inductor with a 68K. This gives a more vocal quality to the wah. Some Vox Clyde McCoy wahs had 100K resistors here.

Replace the 470 ohm resistor (some have 390 or 510) at the emitter of Q1 with a lower value. This increases gain, which is useful if you've converted to true bypass. The bass response is also increased. Too low a value here may introduce some distortion and make the wah sound muddy. Try 270 - 330 ohms to start with.

Replace the 1K5 resistor between the base of Q1 and the inductor with a larger value. This increases the midrange and helps if your wah sounds dull and muted when you rock the pedal back. Try 1K8 to 2K7. Higher values than stock also smooth out the bass-treble transition. Most people refer to the 33K as the "Q" resistor, but this resistor also affects the Q.

Change the sweep by swapping the 0.01µF cap between the emitter of Q2 and the inductor. A smaller value will make the wah sweep more trebly and vice-versa. If you're converting to or from a bass wah, this is the one to change. Try 0.068µF for a bass wah.

If you've converted to true bypass, replace the 68K series input resistor with a lower value, say 47K. This gives a slight increase in volume. Too low a value is likely to result in the pedal picking up radio interference. This can be addressed by adding small value (10 - 20pF) capacitors between the collector and base of each transistor. 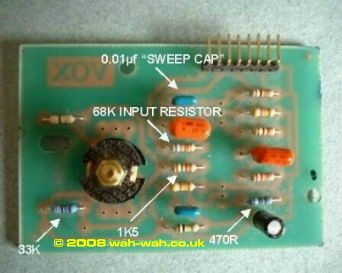 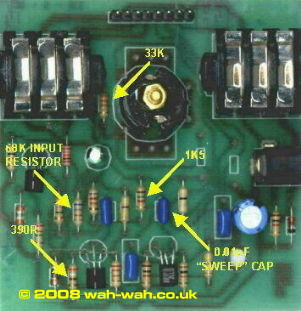 You can use any old pot, but cheap carbon pots will wear out in no time and standard log/lin resistance tapers aren't ideal for use in a wah. Commercial wah pots have a kink in the taper, where the resistance suddenly shoots up within a small degree of rotation. This kink is the point where the bass-treble transition is most noticeable, and which makes the wah so expressive.

A standard log (audio) taper pot will produce a sweep which is mostly treble, unless you sacrifice the high frequencies to get some low end - a pedal with an extra long throw helps. A linear taper pot will sweep more quickly from treble to bass, but it's a smooth sweep and not very expressive. For a "correct" Vox/Crybaby wah pot, there are a few options, but they are relatively expensive. The better ones are modelled on the resistance taper of the ICAR pots found in '60s Vox wahs. I have my own ICAR type pots, which I use in my own wahs and also supply as a replacement part.

Colorsounds use a cranked linkage to get a non-linear sweep from a linear pot. I recommend Bourns conductive plastic pots for these. Unfortunately, they're not available as a dual gang version for wah-swell pedals.

Lifting the earth connection of the 4.7µF capacitor will cancel the wah effect and leave you with a volume pedal. The wah circuit will thin out the tone in volume mode - to get around this, the '70s Jen Wah-Volume pedal switches in a 4K7 resistor and 0.22µF cap in series across the 0.01µF "sweep cap". This isn't a very useful mod in practice; if the pot is set to get a good wah sweep, it won't go silent in volume mode, and if it's set up to kill the volume, there won't be enough treble in the wah.