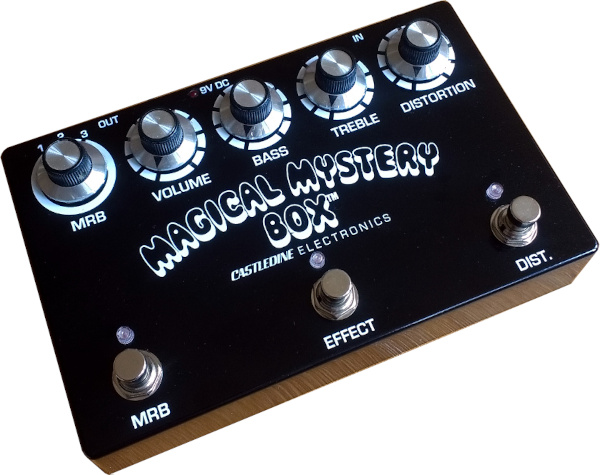 The Magical Mystery Box™ circuit is based on the "Brilliant" channel of the JMI-era Vox Supreme/Defiant/Conqueror solid state amps. This series of amps was introduced in 1967 and various models were used by the Beatles on the Magical Mystery Tour EP and the White Album, and also by the Rolling Stones, from the We Love You single through to Let it Bleed. An original Vox Conqueror amplifier was used for reference in the creation of the Magical Mystery Box™.

The pedal provides the clean, trebly sound of the amp, and has two switchable effects: MRB (Mid-range Resonant Boost) and Distortion. The MRB feature produces the same effect as a fixed wah (in fact, the Vox wah wah circuit was a development of the MRB effect).

The latest batch will by default be made without any LEDs on the foot switches, as were the first custom built MMBs. It looks cleaner without LEDs cluttering up the face. :)

LEDs remain an option, at an additional charge - please see pricing below.

Features are as follows: