My aim with these is to produce a wah which captures the sound of a 1960s Vox, which for most people is still the benchmark wah. Modern mass-produced wahs invariably fall short - common criticisms are shrill treble, muddy bass and harsh distortion. The key component is the inductor; I wind my own inductors and an accurate reproduction is assured by having vintage examples for reference.

The end result is a vocal wah with a well balanced sweep, smooth treble and resonant bass. Parts are chosen for quality rather than on price, and each pedal is made entirely by me, from the machining of the raw castings to final assembly. The enclosures are cast for me by a local foundry, patterned from a 1960s "grey" Vox pedal.

The standard wah features an updated version of the 1967 Vox Clyde McCoy circuit. The circuit board has four trimpots to allow tweaking and is therefore capable of a range of sounds.

My standard inductor is a hand-wound replica of the halo inductors found in early Vox wahs. These inductors are only available on replacement boards or in wah rebuilds from me or Tom Lanik at North Star Audio. I no longer sell inductors separately, nor do I supply any other manufacturers. 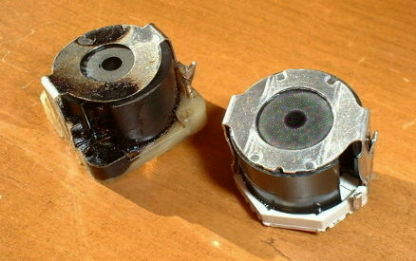 The PCB (pictured below) is also available separately for DIY installation, or as part of a complete "drop-in" circuit assembly, with new jacks, pot and foot switch, wired for true bypass. 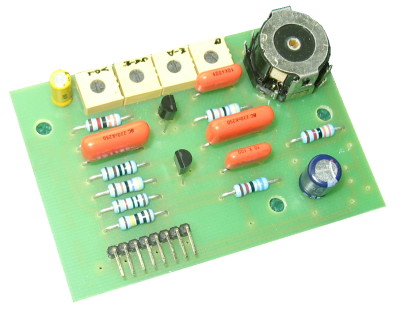 This PCB is a direct replacement for the US-made Vox V847 and plugs into the stock wiring connector. It will also fit any Thomas Organ or Dunlop Crybaby, or the Vox V848, with modifications to the wiring. It will not fit the new Chinese-made V845 or V847-A, as the PCB mounting bosses are in different locations.

NEW - Castledine wah pot, based on the ICAR from one of my favourite 1960s wahs. Supplied with a new gear and hardware, ideal for replacing worn out pots in Vox and Crybaby wahs.

This is a replica of the Vox wahs made in England by Jennings Musical Industries (JMI) during 1967-68 (see the Vintage Gallery). These had a very distinctive sound, with a higher sweep range than the Italian-made wahs. Original examples are relatively scarce and command prices in excess of £ 1000. My replicas are as close as you will get and are based on careful study of several original Jennings Vox wahs. The circuit (pictured below) is built in exactly the same way as the original, using a custom made board.